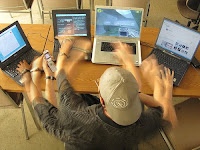 This post originally appears on The Urbane Way blog.

Multitasking is an art. It requires a specific set of skills to focus on numerous tasks at one time and to complete those tasks successfully. Perfect example: The mom who can cook dinner, set the table, fold laundry, entertain a child and talk on the phone all in a short time span without making a single mistake.

One of the first things I remember learning while studying PR at Central Michigan University was working at an agency requires serious organizational skills and the ability to juggle multiple tasks/clients on any given day. Teachers and speakers at conferences reminded my classmates and I several times that if we can’t thrive on a fast-paced work environment that quickly jumps from one project to the next, then agency life isn’t for us.

Now that technology and the social Web play such an enormous part in our lives, our attention is divided across even more platforms. We are living amidst a social media revolution. It’s considered completely normal to have two or more email accounts, two computer screens and Facebook, Twitter and Skype all open on our computer as we do work. Heaven forbid we miss an important tweet or Facebook status update while we’re plugging away at work! Some may consider all this a distraction. But for those of us who feel we’re masters of multitasking, it’s absolutely possible to be productive, even though the frequent temptation of checking social networks creeps up more often than it would if we weren’t spending so much time online.

Multitasking and dividing our attention is great because things get done more quickly, right? On the flip side, too much multitasking can be detrimental and cause more harm than help. According to a recent New York Times article, “scientists say juggling e-mail, phone calls and other incoming information can change how people think and behave.” Constant bursts of information are actually hindering our ability to focus. Research shows that heavy multitaskers have more trouble focusing and ignoring irrelevant information. They also experience more stress.

This topic has been on my mind lately as I’ve noticed my short-term memory fails me more often than my long-term memory. I have no problem remembering what I wore for my first day of kindergarten, but I quickly forget a thought I had five minutes ago if I don’t immediately act on that thought or record it for later.

Clearly, this isn’t healthy. Multitasking and spending gobs of time each week online is unavoidable for many people, not just those of us who work in PR and social media. So, how do we avoid our brains turning to mush and dropping the ball on projects thanks to our addiction to multitasking? Here are some suggestions:

What are your thoughts on multitasking? How have technology and the Web affected your ability to be productive? Share any strategies you have for effectively managing multiple tasks!