LIVONIA, Mich., Feb. 23, 2015—TEAM Schostak Family Restaurants (TSFR), a Livonia, Mich.-based family-owned restaurant group with an expansive portfolio of casual dinning, quick service and family dining restaurants throughout the state, has signed the lease with DGPOM Master Tenant LLCD for the first Applebee’s in the city of Detroit. The restaurant will be the first national casual dining chain located outside of the city’s central business district. TSFR Executive Chairman Mark Schostak made the announcement.

Located on the corner of 8 Mile and Woodward near Meijer, construction of the city of Detroit Applebee’s, pending municipal approvals, is slated to begin in June. The restaurant will feature the brand’s new and improved layout designed to elevate the dining experience for guests, including high-rise ceilings, an expanded bar area, more televisions, and larger windows to provide more natural light, as well as décor and painted murals specific to the city of Detroit community. The location will be comprised of more than 100 salary and hourly-level employees.

“TSFR is proud to expand the Applebee’s brand—which is built on the concept of a neighborhood grill and bar—to the residents of this city of Detroit neighborhood,” said Schostak. “As a locally based restaurant owner and operator, we are proud of our Michigan roots and are strongly committed to the success of our state by employing more than 6,000 individuals statewide in our more than four restaurant concepts. Bringing a nationally recognized and family-oriented brand to the city was the right next step for us to truly become part of the city of Detroit community and contribute in a meaningful way.”

In 2012, after three decades of experience in growing and managing successful restaurant concepts in Michigan, such as Burger King, Del Taco and a joint venture with Olga’s Kitchen, TSFR purchased the 65 Applebee’s in the state of Michigan from California-based Dine Equity. The company further invested $12 million to revitalize the restaurants in the state and incorporate a neighborhood grill and bar atmosphere, complete with murals focused on each community they serve, more televisions and increased seating capacity. A local company committed to increasing its engagement in Southeast Michigan, TSFR has remained focused on its goal of building more Applebee’s locations in the region, adding two new locations—Southfield and Livonia—in 2014 before announcing its plans to build in the city of Detroit in 2015.

In addition to owning and operating its Applebee’s locations, TSFR’s portfolio includes 60 BURGER KING® restaurants, four Del Tacos, 11 joint ventures with Olga’s Kitchen establishments statewide. In December 2014, TSFR also announced its plans to bring 25 locations of the Seattle-based MOD Pizza to Michigan during the next five years. TSFR has already signed the first two MOD Pizza leases in Northville and Livonia—introducing the brand to the state. 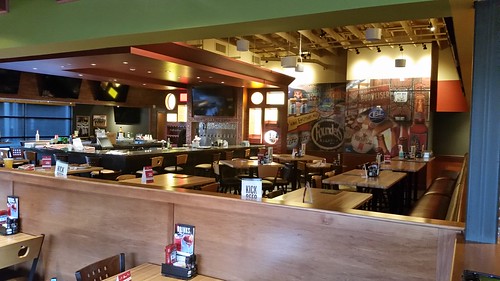 Livonia-based TEAM Schostak Family Restaurants will begin construction of the first Applebee’s in the City of Detroit in June. The restaurant will feature the brand’s new and improved layout design, complete with high-rise ceilings and an expanded bar area.

Applebee’s (www.applebees.com) is the world’s largest casual dining chain, with approximately 2,000 locations in 49 states, 15 countries and one U.S. territory. Based in Kansas City, Mo., Applebee’s restaurant takes pride in providing a welcoming, neighborhood environment where everyone can enjoy the dining experience. Applebee’s Neighborhood Grill & Bar® is a DineEquity, Inc. (NYSE:DIN) brand, and is franchised and operated by Applebee’s International, Inc. and its affiliates.