NOVI, Mich., Aug. 6, 2014 — The Choon’s Design patent for its Rainbow Loom® rubber band bracelet making kit has been validated after an unsuccessful challenge by LaRose Industries, maker of the Cra-Z-Loom. Following a review, the United States Patent and Trademark Office confirmed that the Rainbow Loom’s creator Cheong-Choon Ng is deserving of U.S. Patent 8,485,565, granted in July 2013. John Siragusa, patent attorney for the Rainbow Loom at Carlson, Gaskey & Olds, made the announcement.

The specific patent in question involves Choon’s innovative design for the Rainbow Loom’s Brunnian link making device, which is used to create brightly colored bands into customizable bracelets. This outcome allows his company, Choon’s Design, to better defend their intellectual property against imitation kits that have flooded the market following the Rainbow Loom’s incredible success.

“It’s very gratifying to know that our hard work has been protected and upheld by the granted patent,” said Choon, an independent inventor and entrepreneur. “This result encourages our team at Choon’s Design to continue innovating and designing new products, knowing that we can fully protect our inventions.”

Choon first began working on the Rainbow Loom in 2010 as a way to become closer with his daughters, then aged 12 and 9. After realizing the potential of his new invention, Choon and his wife Fen risked their entire $10,000 life savings to bring the Rainbow Loom to market. Although the path to success has been wrought with challenges, the Rainbow Loom has become one of the hottest selling toys in America, with total unit sales between six and seven million kits.

“With the incredible success behind the Rainbow Loom, it was inevitable that copycats would try to profit off Choon’s work,” said Siragusa. “Now we can move forward knowing that the U.S. Patent Office has held the patent to be valid and take the appropriate steps to defend his rightful intellectual property against these imitations.”

Choon’s Design is not resting with one successful product but continues to make improvements to their original Rainbow Loom and invent new designs, including a more portable jewelry making kit called the Monster Tail™. The newly validated patent for the Rainbow Loom will be good through 2031. Choon’s Design and Carlson, Gaskey & Olds will continue to pursue additional intellectual property protection for their new designs and inventions, both in the United States and worldwide.

For a downloadable photo of inventor Cheong-Choon Ng, click below: 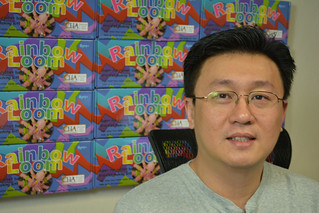 About Rainbow Loom Created in 2010, the Rainbow Loom® is America’s hottest selling craft set and winner of four Toy of the Year Awards in 2014 by the Toy Institute Association, Inc. With it’s patented designed, Rainbow Loom allows kids to weave brightly colored bracelets and rings and share with their friends. Designed by independent inventor and entrepreneur Cheong-Choon Ng, the Rainbow Loom is both fashionable and educational, improving fine motor skills, hand-eye coordination and visual-spatial reasoning. On pace to sell over 8 million kits this year alone, find the original Rainbow Loom, Monster Tail™ and other Choon’s Design products at quality retailers around the globe or online. For more information, visit: www.rainbowloom.com.