Bridge on schedule to be fully operational in early 2016

“We are preparing the embankments on both sides of I-75 right now,” said Conti. “We will begin pouring concrete in early 2015, and expect to have the bridge fully operational sometime in early 2016, well in advance of our projected grand opening.”

Once completed, the bridge will feature a dedicated lane for rapid transit unlike anything in the Gainesville area. The five-lane bridge will provide Celebration Pointe with a second major access point to the project aside from the main entrance at West Archer Road, just off of I-75. The bridge will also connect to other major arterials leading to and from significant points of interest in Gainesville, including its major healthcare corridor, central business district and the University of Florida.

“Given the tremendous response we have received from retailers, other end-users and the community at-large, the commencement of the bridge construction signifies yet another key milestone for us,” said Conti. “Designed with sustainability and multi-modal connectivity in mind, the project includes multiple transit stops as well as walking and biking paths. The commencement of the bridge construction is a first step in realizing these strategic planning goals.”

Located at the intersection of Interstate 75 and Archer Road, Celebration Pointe is a 125-acre, 1 million-square-foot mixed-use development in the heart of Gainesville’s retail corridor. Along with more than 300,000 square-feet of planned Class-A office space, Celebration Pointe will feature approximately 375,000 square-feet of a unique blend of entertainment and specialty retail, anchored by Bass Pro Shops and a national luxury-seating theatre, which will be the only one of its kind in the Gainesville marketplace. The project will also feature a recently announced boutique Hotel Indigo, nearly 1,000 multifamily residential units and a mix of restaurants, most of which will be new to the market.

The project will also feature fully integrated recreational and sustainable resources through the campus, including 100 acres of conservation area, which will contain a network of hiking and biking trails connecting Celebration Pointe to the surrounding Lake Kanapaha Conservation and Split Rock Conservation Areas.

Pre-development site work for the project began in August to prepare the site for the necessary infrastructure improvements. Vertical construction for the initial phase of development is scheduled to begin in mid-summer of 2015, with Phase I of the project scheduled to open in the Fall 2016. 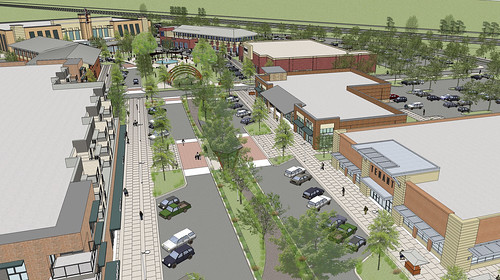 Celebration Pointe is a unique, mixed-use development project located at the intersection of I-75 and Archer Road in the heart of Gainesville, Fla. Slated in open in the fall of 2016, the 125-acre, 1 million-square-foot project will feature specialty retail, dining entertainment, Class A office space, hospitality and nearly 1,000 multifamily residential units. Sustainable and walkable, Celebration Pointe’s diverse mix-of-uses provides the best attributes of an energized and engaging urban environment. For leasing opportunities or more information, please visit: www.celebrationpointe.com.