Construction to begin by spring 2015

DALLAS, Texas, February 23, 2015—Dallas-based Tribute Senior Living announced today that it will begin construction on an advanced memory care and senior living community at the corner of Preston Road and Broadway in Prosper, Texas this spring. Upon completion in 2016, the 60,000-square-foot community will be home to 100 residents. Tribute Senior Living partner Charles Hodges made the announcement.

“There are more than 5.2 million people living with Alzheimer’s disease in the United States,” said Hodges. “That number is expected to grow to more than 16 million by 2050. Those are very real numbers and when you also consider the family and friends touched by this horrible disease, we are talking about hundreds of millions of people affected in one way or another.”

Hodges, who is also founder and president of Dallas-based Hodges & Associates Architecture, witnessed first-hand the inadequacy of Alzheimer care environments and treatments while his father lived in and out of nursing facilities for years. In conventional memory care and senior living facilities, caregivers work with patients to reduce the anxiety caused by their surroundings. But Hodges, like any good architect, looked at it another way. He thought, “what if the facility could be designed to prevent these triggers?” It was this question that led Hodges to align himself with some of the most respected medical, research and operational experts in the field of memory care and ultimately design what will be the most thoughtfully constructed memory care and senior living community in the US.

“Nobody is designing for dementia. They will take a wing of a nursing facility and keep the doors locked. That is their memory center,” Hodges said.

Traditionally, memory care and senior living facilities have been constructed with more emphasis on cost per-square-foot and less emphasis on the designed environment. Elements such as inexpensive HVAC units and lighting can add to agitation that dementia patients commonly experience. What will set Tribute Senior Living apart is that every design element is specifically chosen to prevent agitation and make patients as comfortable as possible.

Austin, Texas-based equity investor and Tribute Senior Living partner Rex Paine said, “This project has a special place in my heart.  My mother currently suffers from Alzheimer’s and we recently moved her into a memory care facility.  This is just the first of a number of Tribute Senior Living Communities that we will be building, each of which will have the same thoughtful design elements and cutting edge care.” Paine is owner of Kingbridge Capital and has been a real estate equity investor nationally for more than 20 years.

Sodalis Elder Living principal and Tribute Senior Living partner Mark Rushing will serve as the operating partner. “We have refused to accept the notion that there is very little that can be done for a person with Alzheimer’s disease and have purposefully designed and operated communities with the goal of making a substantive difference. Two years ago this became very personal for me when we began caring for my mother in law in one of our communities.  While we may not be able to change the outcome we can, and do, change the journey.  That is our commitment.”

The team has also formally partnered with Dr. Paula Grammas, the former executive director of the Garrison Institute on Aging and tenured professor of neurology at the Texas Tech University School of Medicine, to ensure that the communities utilize every environmental and care advantage in treating Alzheimer’s and dementia. “As a biomedical scientist who has spent my career in Alzheimer research, I am excited to be part of the forward-thinking approach embodied by Tribute Senior Living,” said Grammas. “While research into the causes of Alzheimer’s is ongoing, it is imperative that new and evolving knowledge about brain health be translated into clinical practice as rapidly as possible. This compassionate, activist approach is the heart of the Tribute Senior Living philosophy.” 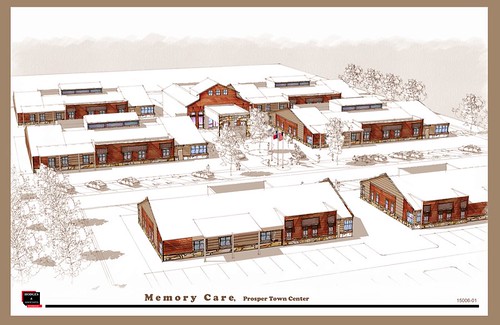 Tribute Senior Living will begin construction at the corner of Preston Road and Broadway in Prosper, Texas this spring. Upon completion in 2016, the 60,000-square-foot community will be home to 100 residents.

For more than three decades, HODGES & Associates Architecture has been developing environments that enhance our communities and lifestyles.  The company prides itself on building lasting relationships of trust with clients through innovative design and exceptional customer service. HODGES Architecture is dedicated to creating value for the client and the consumer in harmony with the needs of the environment.

Sodalis offers a research-based approach to serving people and families affected by Alzheimer’s and related diseases. As “a family who serves families”, Sodalis continually strives to strengthen their commitment to the residents they serve. With a staff-to-resident ratio that is higher than the industry standard, they have the freedom to take the needed time to attend to, care for and interact with each resident. At Sodalis communities, dementia and related diseases are honored and cared for in a therapeutic environment with individualized plans. The belief of Sodalis is that there is still purposeful life after dementia and Alzheimer’s.